skip to main | skip to sidebar

Yet another reason why I am considered to be crazy is my hobby of taking pictures of abandoned shoes in Honduras. I don't think I would be so interested in them if I just saw one every once and awhile. However, they are on just about every street in the border town I call home. It is curious because there is usually just one half of the pair left behind. Is the other shoe still being used? Was this the location where the shoe gave out, never to be worn again? Perhaps the lack of a reliable trash disposal system is one factor in the random placement of old shoes. I can't imagine burning shoes would be very pleasant either.

Here are some examples of the abandoned shoe phenomenon:

Photo and video editing at www.OneTrueMedia.com
Posted by Jacinta Mucosa at 1:23 PM 5 comments: 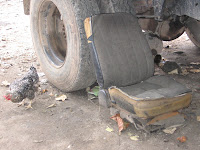 We are all aware of the problems and financial devastation that occur when someone has his/her identity stolen. Often the most risky aspect is the compromise of the social security number. Well, the mister and I can also testify to another phenomenon that did not involve financial information: cross border identity theft.

Approximately two years ago, everything was in order for my husband to get his K-3 visa and come to the US. He went to Tegucigalpa to get his medical exam and brought all the required paperwork for a second trip to Tegucigalpa to have his interview at the US Embassy. The interview went smoothly, he had every document that was requested and answered all the questions appropriately. However, at the end of the interview he was told by the official, "All your documents are in order, but your case has been flagged." Hmm, why would his visa petition raise concern? Well, sir, "Someone with your exact name and birthday is wanted for murder in the US." To add further fright he was told "If you were on US soil, we would arrest you right now." To resolve the issue he was told to come back in the afternoon so they could take his fingerprints.

The mister left and went to his aunt's house for lunch. He told her what they had told him and she said "You are not going to go back there!" out of fear that he would be detained. Of course he returned and had the fingerprints taken and traveled home to wait for the results. Six weeks later he got the call that his fingerprints had come back clean and that he could return to Tegucigalpa to get the visa stamped in his passport. He was told that it was suspected that someone from his hometown took his information and used it when he entered the US illegally.

We aren't sure of all the criminal details more than that this person was wanted for murder. When my husband told me this story, I immediately started searching online for any criminal incidents with his name listed. I never found a record with all four parts of his name in order. The closest match I found was with his first name and 1st last name. The nickname of this criminal is "the doctor and angel of death". I still occasionally refer to him as "the doctor" to joke about our past troubles.
Posted by Jacinta Mucosa at 11:13 AM No comments:

Jacinta Mucosa
I am a US citizen married to a Honduran man, trying to divide time between each country.